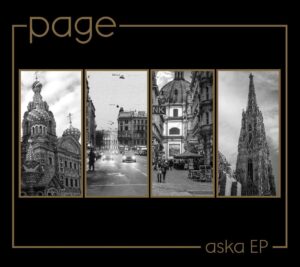 A new companion release to ‘Under Mitt Skinn’ which came out in Summer 2020, PAGE issue their third EP in six months entitled ‘Aska’.

The trailblazing Swedish duo of Eddie Bengtsson and Marina Schiptjenko have been fairly prolific of late and partying like it’s 1979. In acknowledgement of Synth Britannia, TUBEWAY ARMY and early ULTRAVOX have been very much the key influence in the recent work of PAGE, most notably with the ‘Start’ EP and the long player ‘Fakta För Alla’.

In defence of his nostalgic but affectionate ethos, Bengtsson said to Zero Magazine: “Since neither Numan nor Foxx engage in that type of electronic pop anymore, PAGE is allowed to do it instead!”

Mixed by Richard Flow of MACHINISTA who ably assists PAGE into realising themselves as a retro-futuristic post-punk electronic band, Bengtsson added “All the music is made on synths, but I try to emulate different instruments and create the illusion that ‘here is a bassist, here is a drummer and here is a keyboardist’”.

A second cousin to ‘Saint Anastase’ from the ‘Under Mitt Skinn’ EP, ’Stefansplatz’ is an enjoyably progressive instrumental opening in the vein of THE HUMAN LEAGUE when Martyn Ware and Ian Craig Marsh were at the synthesizer helm. But tackling the sensitive subject of burn out, the ‘Aska’ title song sees service resumed in the Vox ‘N’ Foxx department.

The delightful ‘En Kamera Ser’ though is quirky elektronisk pop bursting with synth hooks, echoing a more Motorik ‘Ett SOS’ and the nostalgic technological observations of KRAFTWERK where cameras were once tactile entities of their own, not a side function in a phone alongside bank accounts. 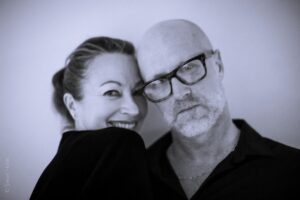 ‘Hög Som Jag’ celebrates the joy of music that is classic PAGE, while ‘Bara Tryck På Play’ pays homage to TUBEWAY ARMY’s ‘Bombers’ or THE STRANGLERS’ ‘(Get A) Grip (On Yourself)’ where listeners are free to choose, depending on their thinking.

To close the main act, PAGE take out full Numanoid membership on ‘Jag Var Så Nära’ as the dark but melodic adventure mines the glory that is ‘I Die: You Die’.

Using tracks originally featuring on its predecessors, ‘Aska’ is supplemented by a poppier remix of ‘Ta det som en man’ by SOCIAL AMBITIONS and a punk cover of ‘Under Mitt Skinn’ from ATTENTAT, but the best bonus comes from DATAPOP who adopt a minimal machine approach to ‘Panik’ that turns it into ‘Home Computer’.

Twinned with ‘Under Mitt Skinn’, ‘Aska’ forms a combination album that becomes reality via a limited vinyl edition that presents these sessions as a body of work with a clear vision. “Good music should be given all the time, attention and concentration it deserves!” says Bengtsson as he remains creatively in the Moog. After all, it is all just a matter of pleasure and principle.

‘Aska’ is released by Energy Rekords as a CD EP, available direct from https://hotstuff.se/en/cd-page-aska-ep-foldout-digipack-cd-limited-edition-500-copies-ercd176/79017

The ‘Aska Under Mitt Skinn’ combination vinyl LP is available direct from https://hotstuff.se/en/lp-page-aska-under-mitt-skinn-limited-edition-300-copies-vinyl-only-erlp177/79018