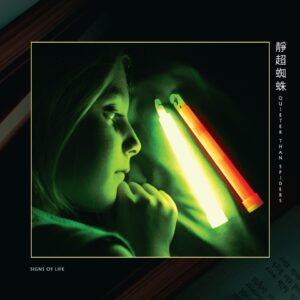 After first breaking cover in 2013, Shanghai synthpop trio QUIETER THAN SPIDERS mysteriously disappeared despite having previewed numerous tracks on YouTube and Soundcloud.

But in 2018 there were ‘Signs Of Life’ as QUIETER THAN SPIDERS officially released their first track ‘Shanghai Metro’ on a compilation via Amour Records. And now, the anonymous family group of Leon, Yi Fan and Yao finally release their long awaited debut album on Anna Logue Records, promising “Electric sound-waves that pulse through our sleep… and our dreams”,

It is a body of work that has a timeless quality which manages to be simultaneously futuristic and classic, just like the electronic pop of yore. ‘Signs Of Life’ begins with the bubbling chiptune inspired ‘Arcade Eighty – Five’; both rigidly rhythmic and richly melodic, it is exactly what KRAFTWERK would be sounding like today if they could be bothered to make new records. With a harsher robotic tone, ‘No Illusion’ keeps up the standard with its sharp hooks and recalls the endearing homemade indie electro of WHITETOWN.

As well as ten actual compositions, ‘Signs of Life’ also features eight conceptual interludes, the first of which being the self-explanatory ‘Disorientation’ which in 2019 falls into that ‘Stranger Things’ territory. Also accidently falling into current music trends, ‘Night Drive’ would probably be considered Synthwave although the chipmunk voice samples and sectional structure keep it firmly within the classic synthpop template.

The very short ‘2139’ looks ahead courtesy of Jean-Michel Jarre derived arpeggios and string machines to act as a intro to the simply wonderful ‘The Land Of The Lost Content’. Inspired by an AE Housman poem, it glides with a glacial beauty that not only is appealing to the ear, but can be danced to as well. 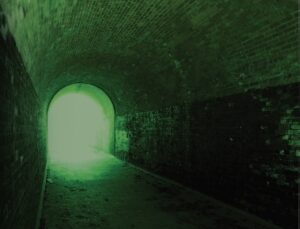 The soothing piano on ‘Distant’ provides respite from all the beats before ‘Shanghai Metro’, a whirring tune that would be exactly what OMD would sound like if they formed in the 21st Century.

The music box sequence of ‘Chang’e’ has a European arthouse air about it, which is appropriate as the following ‘Fessenden Grove’ is a solemn piano piece that incorporates ‘Scenes From Childhood’ by German composer Robert Schumann. But its eerie voice samples stating “this young man’s dead” prepare the listener for the loss and despair expressed in ‘Hibakusha’.

A beautifully haunting song about the aftermath of Hiroshima, it is a thoughtful merging of SOLVENT and Michael Rother which as far as subject matter and melody goes, is up there with ‘Enola Gay’. Fittingly in that unsettling ‘Stranger Things’ vein, the horror of ‘Silent Centre’ comes afterwards.

That fatalistic air continues with ‘Komarov’, an instrumental eulogy to the cosmonaut of Soyuz 1 who was the first man to die on a space mission; capturing the tragedy in music, it is a hairs on the back of the neck moment, swathed in chilling but melodic sadness; OMD would be rather proud if this was one of their own…

And as the album becomes much more downbeat, ‘Brave New World’ does as title suggests, dressed in dense Vangelis sweeps. More personal and introverted, ‘The Signs Of Life’ stares mortality in the face and reflects on the difficult emotions that come when the end is nearer than the beginning, “when the light begins to fade”.

The longest track on the record, the slow expansive drama of ‘The Statues’ could not be more different from ‘Shanghai Metro’, the mournful choir boy melancholy standing alone in the cinematic synthesized atmosphere. The funereal instrumental ‘Zara In The Stars’ closes ‘Signs Of Life’ with a glorious heavenly ambience perhaps not heard since MOBY closed ‘Hotel’ with ‘Homeward Angel’. 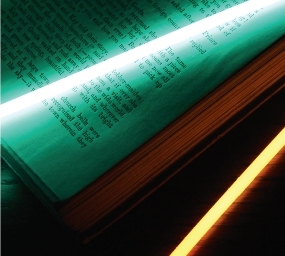 n common with records such as ‘Low’, ‘Closer’ or ‘Play’, ‘Signs Of Life’ begins in an upbeat fashion but then gets increasingly slower, stranger and sadder. And with its conceptual interludes and emotive avant pop in various tempos, it is a direct descendent musically of OMD’s ‘Dazzle Ships’ and ‘English Electric’.

A document of melancholy and uncertainty through its difficult gestation over the last six years, ‘Signs Of Life’ is one of the best electronic pop albums of 2019. Its understated artistic perseverance has been well worth the wait.

‘Signs Of Life’ is released by Anna Logue Records on 4th October 2019 in double CD, double vinyl LP and download formats featuring a bonus album of 10 remixes by artists including Kevin Komoda from RATIONAL YOUTH, VILE ELECTRODES and THE SILICON SCIENTIST – to pre-order, please email orders@annaloguerecords.com

Information on prices and postage at https://annaloguerecords.blogspot.com/p/shop-mail-order.html