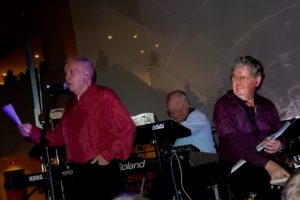 To celebrate 60 years of THE RADIOPHONIC WORKSHOP, the pioneering collective held a pair of events within the plush confines of The British Library.

The first comprised of a panel discussion chaired by Louise Gray of The Wire, while the second was a surround sound concert with striking visuals directed by Obsrvtry, a collaboration between THE RADIOPHONIC WORKSHOP, Michael Faulkner and Ben Sheppee.

Gathered for the panel discussion were Paddy Kingsland, Roger Limb, Peter Howell and archivist Mark Ayers with special guest Martyn Ware who performed on their new album ‘Burials In Several Earths’; original member Dr Dick Mills joined the chat later on after being held up in London’s Friday rush hour. 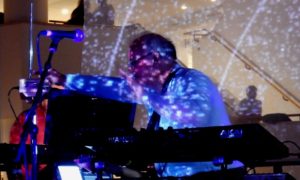 They were inspired by studios set up by Karlheinz Stockhausen in Cologne for pure electronic sound exploration and Pierre Henry in Paris which had a more of a musique concrète remit.

So if a programme required a door opening or a car crash, a sound effects library could be used, but as Mark Ayres put it: “if you wanted a sound effect for a nervous breakdown, where would you go for that?”. Considered to be distinct from the corporation’s musicians and initially working with virtually zero budget, THE RADIOPHONIC WORKSHOP tended to rescue obsolete equipment that had been dumped by other departments.

Using and abusing technology to create new sounds, its members like the late Delia Derbyshire would be tasked with two hour programmes each week and had to work to deadlines, something which she often had trouble with and referred to as her “variable reluctance”.

Of course, working with early electronics was not straightforward. The tape machines of the day were very unreliable and Roger Limb talked of when THE RADIOPHONIC WORKSHOP started performing as a live act and using digital equipment, discovering “how surprisingly varied the tape machine output was”. He concluded that “what we like about analogue things is to do with the variance, stuff that you don’t immediately hear but is adding to the interest”.

Paddy Kingsland described how Delia Derbyshire and Brian Hodgson (who created the sound of the TARDIS by running a key along a bass string of a gutted piano before electronically treating it) were “into their happy accidents”. It was something that Roger Limb summarised as “something that’s actually wrong that suddenly becomes right”, like the BBC fire extinguisher that was found to be approximately in D# when struck! 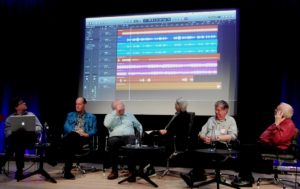 The panel discussion also included a fascinating demonstration by Mark Ayres of Delia Derbyshire’s component parts for the theme of ‘Dr Who’. While the music was written by Ron Grainer, it was Derbyshire who orchestrated the arrangement, painstakingly recording short bursts of manually manipulated oscillator onto tape, cutting them up and splicing them together to form longer and more recognisably musical sections.

The bass was actually a plucked string, recorded and copied via tape loops onto another machine until a series of different pitches were made, with Ayres explained that “every one of those notes was a piece of tape cut together with a razor”. Roger Limb pointed out that the bassline which Derbyshire had constructed was even cleverer because “the attack only happens on the front of the phrase”. 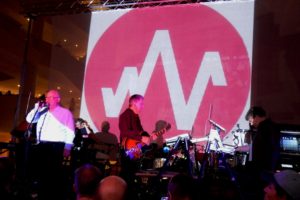 The music had a profound impact when it was first aired in 1963 with Dr Dick Mills remembering people were intrigued and asking “WHAT THE HELL WAS THAT?” because they couldn’t work out the instrumentation or how it was realised.

As Martyn Ware put it, “it promised you were going to be visiting worlds that you couldn’t possibly comprehend” while Peter Howell added “You were genuinely hearing things you had never heard before”.

Adventurous manipulators of sound who came up with instruments like the Wobbulator, Peter Howell had the view that “the equipment can either be our servant or our partner”.

While discussing these two approaches, he casually mentioned how an old BBC schools film he had made demonstrating the Fairlight CMI to children had been re-edited into a hilarious spoof YouTube video entitled ‘How Drum ‘N’ Bass Is Made’. 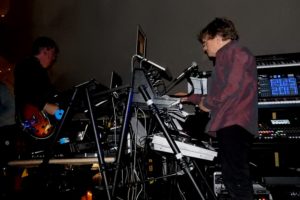 With the panel discussion over, THE RADIOPHONIC WORKSHOP moved over to the Entrance Hall for their two-part live performance.

With hardware such as an Arturia Matrixbrute, Korg MS20, Roland JX3P and Yamaha DX7 clearly in view, along with various laptops and controllers, the first section comprised of more progressive and lengthy ambient experimental pieces.

The impressionistic colours of ‘Picasso’ began the evening before the band settled into performing selections from ‘Burial In Several Earths’. Inspired by Sir Francis Bacon’s incomplete novel ‘New Atlantis’, Daphne Oram used a section of it as an electronic avant-garde manifesto for the workshop. 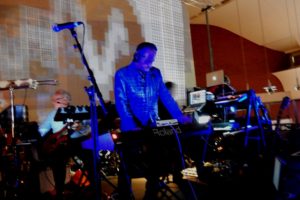 Her spirit could be heard within these watery overtures recalling Virgin era TANGERINE DREAM while in between these lengthy improvised soundscapes, Martyn Ware joined the band on a Roland Jupiter 8 for a rendition of the comparatively bite size interlude ‘Not Come To Light’.

During the interval, DJ Tom Middleton treated attendees to the spacey sounds of JEAN-MICHEL JARRE, TOMITA and VANGELIS.

So it was fitting that when THE RADIOPHONIC WORKSHOP returned to the stage, it was with ‘The Astronauts’, a pacey tune reminiscent of Evangelos Odysseas Papathanassiou. ‘Ziwzih Ziwzih 00-00-00’ from ‘Out of the Unknown’ was the first of the more Sci-Fi related compositions, a theme which continued with some music from ‘Hitch-Hiker’s Guide To The Galaxy’.

Meanwhile ‘Magenta Court’ from ‘Through A Glass Darkly’ explored more proggy territory. The multi-instrumental capabilities of the ensemble were astounding with the main players moving between synths, guitars, wind controllers and taking turns to address the audience. 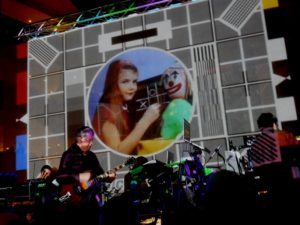 One thing that has been lost since the advent of 24 hour television in the UK since 1997 is Test Card F. So when the iconic image of Carole Hersee playing noughts and crosses with Bubbles the Clown was projected, it saw the band to wig out in a Floydian style with a sample of its accompanying music.

A rendition of ‘Vespucci’ from ‘Fourth Dimension’ also ventured into cosmic territory while ‘Vortex’ kept the Sci-Fi fans happy,

But it was the brilliant new composition ‘eShock’ that was the revelation of the evening. With Roger Limb taking to the microphone to warn the audience that they were in a “high risk area” and vulnerable to electronic shock, what proceeded was a vibrant electronic piece aided by a live rhythmic backbone from Kieron Pepper. With a cacophony of blips and beats that would make ORBITAL proud, an intense frenzy of psychedelic guitar and Theremin from Paddy Kingland was the icing on the cake. 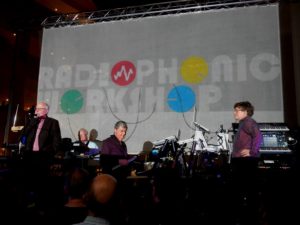 Dr Dick Mills joined his colleagues on stage to announce the final number which was naturally ‘Doctor Who’; he even took time to joke and thank the crew for not only helping with the equipment, but also several of the band up The British Library’s many stairs.

Beginning with the familiar Delia Derbyshire take, there was a building improv before a Schaffel flavoured rock out with Kieron Pepper respectfully adding percussive power without swamping his colleagues.

Pepper has also played for THE PRODIGY and he is an example to sticksmen like Christian Eigner as to how to properly mix live drums into electronic music.

Despite THE RADIOPHONIC WORKSHOP members now pushing 70 years of age or more, they possessed more vigour than many acts half their age. 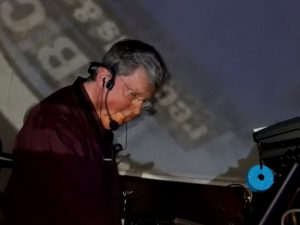 They didn’t start play live together in a concert setting until 2009 and having been cooped up in Room 13 all those years ago, they are now relishing playing to appreciative audiences.

Call it ‘Maida Vale Social Club’ or ‘Last of The Summer Synths’, this whole evening was a moment to savour with electronic music’s elder statesmen giving a lesson to youngsters with their laptops as to how it’s all done.

FIFI RONG The One