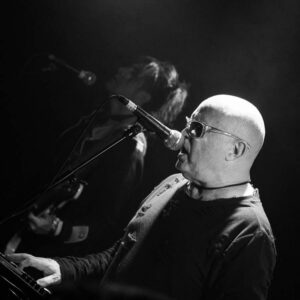 Out of the bands that emerged post-Synth Britannia, A FLOCK OF SEAGULLS were among those to actually make a worldwide cultural impact, initially gaining traction in the US via the cable phenomenon of MTV.

While frontman Mike Score’s outlandish hair style was honoured in Hollywood with comic references in ‘Friends’, ‘The Wedding Singer’ and ‘Pulp Fiction’, their fourth single ‘I Ran’ has been a ubiquitous staple, appearing in commercials for Grand Theft Auto Vice City, Sensationail, Diet Pepsi and Lexus. Greek synth duo MARSHEAUX even borrowed the main riff from ‘Space Age Love Song’ for their signature tune ‘Dream Of A Disco’.

Today, Mike Score is the only remaining member from the original line-up which included his brother Ali on drums, bassist Frank Maudsley and guitarist Paul Reynolds. Notably his hair is now absent, while his scouse accent has mutated into a Trans-Atlantic drawl from years of living stateside.

Dingwalls in Camden was packed for the second London date of A FLOCK OF SEAGULLS’ first headlining UK tour for many years and opening proceedings was KNIGHT$ whose debut album ‘Dollars & Cents’ has been one of the contenders for best album of 2019. 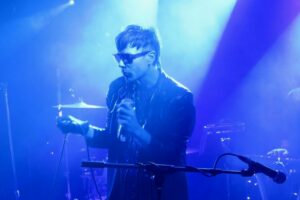 Fronted by the suave and charismatic James Knights, dressed in a black leather jacket and sequined shirt combo, he began support set with Eurobeat thrust of ‘What We Leave Behind’ and the heavenly pop ‘Playin It Cool’.

Playing the role of the perfect beat boy, Knights was slightly restrained physically, thanks to the small stage, but he made every effort to engage the audience with his brand of BRONSKI BEAT inspired Britalo like the amorous ‘Gelato’.

Meanwhile, the snappy ‘Alligator’ provided an amusing observation on the phenomenon of one-sided conversations. ‘Julia’ offered a more romantic take on the appealing KNIGHT$ sound while presenting a token of musical friendship to the audience, there was an authentic rendition of PET SHOP BOYS’ ‘Heart’. The slinky ‘What’s Your Poison?’ appropriately threw in some sunset sax at the riverside venue, before the catchy ‘Dollars & Cents’ closed an impressive warm-up on an already hot Saturday evening.

Standing behind a Roland Fantom 06 outputting crystal clear electronic sounds, Mike Score took his position to begin A FLOCK OF SEAGULLS’ performance with the vintage Sci-Fi rock of ‘Modern Love Is Automatic’. Backed by his usual North American band of guitarist Gordon Deppe from Canadian New Wavers SPOONS, drummer Kevin Rankin and bass player Patrick Villalpando, the debut album opener was followed by ‘Hearts On Fire’ from 1995’s ‘The Light At the End Of The World’ which had the classic air of ‘Space Age Love Song’ about it.

With a rockier growl to his vocal presence, the gothic gloom of ‘Nightmares’ came over more like THE CURE, but the darkness turned to light as the under-rated ‘The More You Live, The More You Love’ provided the first rousing moment of the evening for the mature audience.

The moody ‘Man Made’ and more Motorik ‘She Won’t Let You Down’ showcased varied aspects of the band beyond their singles, but 1983’s UK Top 40 hit ‘Transfer Affection’ was spoiled by some unnecessary bombast and Score being unsure of what octave to sing the tune in.

However, a magnificent rendition of that paean to neu romance ‘Space Age Love Song’ snatched victory from the jaws of defeat, aided by Rankin’s use of a synth drum and his bandmates’ triple call-and-response vocal, while Deppe ably reproduced the textures of original guitarist Paul Reynolds. 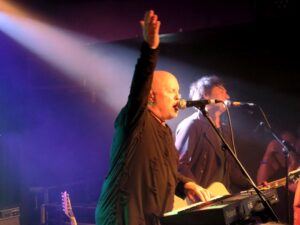 That said though, it all got awry again with the quartet going all SIMPLE MINDS with a prolonged reinterpretation of ‘Telecommunication’; the song was originally two and a half minutes for a reason!

Throughout the show, while Score did speak to the audience, it was the more flamboyant Villalpando who acted as Master Of Ceremonies with a loud “rawk” address that although probably endearing across the water, may well have been anathema for British audiences.

‘Wishing (If I Had a Photograph of You)’ was the moment many were waiting for. A Top 10 UK hit in 1982, it was interesting to be reminded that most of the song’s hooks were instrumental rather than vocal while inspired by a photo of two people running from a UFO, the brilliance of ‘I Ran’ ended the main set.

There was room for an encore and that came with the pleasant surprise of ‘Messages’ from the self-titled debut album, with its more guitar driven dynamics enabling the quartet to fire on all cylinders. 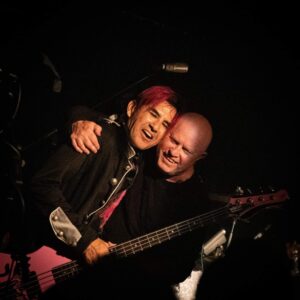 There was no ‘D.N.A.’ or ‘(It’s Not Me) Talking’ but on the whole, the crowd were entertained and satisfied.

When things were good, it was glorious at Dingwalls and while some may only remember the iconic haircut rather than the music, what A FLOCK OF SEAGULLS have proven is they have a number of great songs which more than stand up in the 21st Century.

And unlike say OMD, DEPECHE MODE and SIMPLE MINDS, they also have a Grammy Award on the mantelpiece. A FLOCK OF SEAGULLS more than deserve their place in British pop history.

With thanks to Debora at London Variety

A FLOCK OF SEAGULLS ‘Inflight (The Extended Essentials)’ is released by August Day Recordings in various formats available from http://www.augustday.net/aday054.html