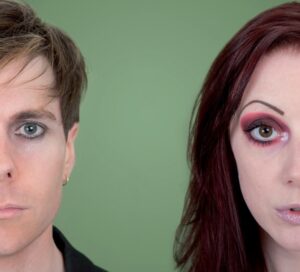 Released in February 2015, ‘In Cold Blood’ was the third and so far final album by SCARLET SOHO.

A duo based in the south of England, James Knights and Scarlet had begun with a more post-punk sound dominated by guitars. Much of the material compiled on ‘In Cold Blood’ had been previously released on the EPs ‘When The Lights Go Out’, ‘Solo KO’ and ‘Two Steps From Heartache’, heralding a greater interest in electronic pop. Much more accessible than any of their previous work, ‘In Cold Blood’ looked set to be SCARLET SOHO’s breakthrough from the underground to a wider audience.

However, it was not to be and the album was unable to gain momentum in a year when NEW ORDER made their recorded return with ‘Music Complete’ and ‘Every Open Eye’ maintained the standing of CHVRCHES as the UK’s leading act in modern synthpop.

But one thing that ‘In Cold Blood’ did do was plant the seed of KNIGHT$, the shades donning solo persona of James Knights; he released the lively Britalo flavoured ‘Dollars & Cents’ in 2019, one of the best albums of that year.

and how it is a lost jewel awaiting rediscovery.

As SCARLET SOHO prepared to record ‘In Cold Blood’, it had been ten years since your debut album ‘Divisions Of Decency’, how had you changed as a band? 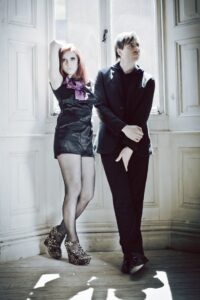 Scarlet: As a band we’d changed a lot in a decade. I was 16 when we started gigging and we never stopped touring in all of those years.

Studio time had previously been very fraught, lacking momentum, with James and myself trying to squeeze as much as we could into scattered time frames – often using different producers, studios, techniques, and both operating on very little sleep.

We had always wanted to release more songs in that decade between albums, but enjoyed touring more, so prioritised that.

We had streamlined things a lot by the time we wanted to record ‘In Cold Blood’ and had a better idea of how we wanted an album to sound as a whole. I think it came out pretty well!

Compared with songs like ‘Speak Your Mind’ and ‘Cyclone’ on the second album ‘Warpaint’ and ‘We Must Destroy’ from ‘Divisions Of Decency’, ‘In Cold Blood’ on the whole seems to be less angsty and fraught, was there a conscious decision to make a more positive statement?

Scarlet: I think it was quite a natural thing for the sound to change by the time we wrote ‘In Cold Blood’. The songs have always reflected where James and I were at, which I think is often quite a surprise to people that don’t ‘get’ electronic music, and deem it to be something cold and calculated.

Over the years our circumstances had changed, my lifestyle was considerably less chaotic at this point, and we were comfortable with being a duo. We were willingly accepting help from additional musicians for live performances, rather than trying to incorporate a rolling cast of (albeit very talented) third members as we had done previously. 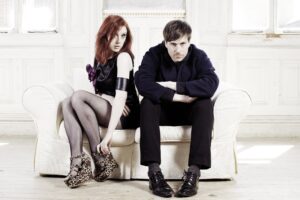 Lyrically it’s a pretty gloomy album, but musically it’s something else, which I think also says a lot about where we were both at.

At the risk of sounding clichéd, we had both grown up quite a lot and I think this album shows a real progression in songwriting, with James really coming into his own. I think the positivity comes from that confidence.

The title song ‘In Cold Blood’ had the opening line “You shot me down” but signalled the album’s intention of more focussed use of electronic instrumentation and less guitars?

Scarlet: SCARLET SOHO started out as a band with three guitars and a drum machine – three! It was a mess, and over the years we shedded a lot of that, with both James and myself only playing guitars on a couple of songs by ‘In Cold Blood’. Prior to Soho we were both in punk bands and by this point, guitars and amps were starting to feel like baggage – both physically and mentally.

We were both getting more out of a well-produced snappy snare and rib-rattling bass synth than a scrappy guitar sound careering around a venue. The latter also being a pain to shift around on flights and in cars. We wanted to strip things back to what we essentially needed, and could really allow to shine. James’ vocal being one of those things. Starting a song with purely that, felt like a call to arms.

‘When The Lights Go Out’ demonstrated more of a pop disco sound? How did this come about?

Scarlet: I really wish I had an answer to this. James and I both love 70s and 80s disco, and it felt brave to incorporate this into a SCARLET SOHO track. I feel like it’s a true representation of the SCARLET SOHO sound, and always sounded fantastic live whatever it was nestled up against in the setlist. But I truly have no recollection of how it came about. In my head it was birthed as a fully formed song. Perhaps it was…? 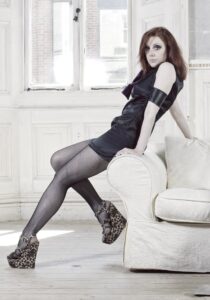 ‘What You Need’ has THIS pulsing electronic bassline that some would now call synthwave, had things like the ‘Drive’ soundtrack or anything like that been an interest at this point? And what was going on with the speeded up ending?

Scarlet: ‘What You Need’ is one of my favourites. I’m a bit of a film buff, and enjoyed ‘Drive’ and the like, but I’m not sure James had seen it. We’d always been into KAVINSKY, but I’ve never twigged that as an influence to this song. The speeded up ending was some studio fun that we thought would translate well to a sweaty club when we toured it. It did.

Listening to ‘Gigolo’ now, it sounds like the start of KNIGHT$, especially in the rousing warning chorus, do you have any thoughts in hindsight?

James: I can remember us thinking the song was a bit too “pop” to be on a SCARLET SOHO album. We deliberated over this for a little while before deciding to be brave and put it on the LP. It’s possible the reaction to this song gave me some extra confidence to create KNIGHT$ in the end, subliminally at least. Maybe it should’ve been a single!

Despite the melancholic words, ‘Two Steps From Heartache’ is another track that blueprints KNIGHT$ and is a tune you still perform, what was your mindset at the time of writing and recording? And is the middle eight from Madonna’s ‘Like A Prayer’ being borrowed here, particularly Guy Pratt’s bass guitar solo?

James: Now I’m going to have to go back to ‘Like A Prayer’ and check this Guy Pratt thing! I think it was a little bit inspired from Stuart Key’s time in the band and some of his music we’d listen to on the road. This song was our attempt to infuse house music somehow. It has the pulsing brass line and hallmarks like that, but in the end it still sounds very Soho. 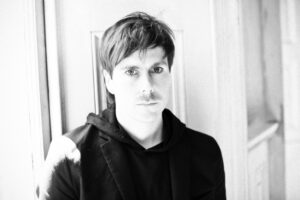 ‘This Town Is Mine’ appears to channel your inner Marc Almond?

James: I’m not a huge fan of slow songs, but now and then we would work on one or two in our spare time.

I appreciate the compliment, because somehow this ended up being one of my favourite and best studio vocals.

You get the vocoder out on ‘Make The Final’ for a bit of robotic Italo, what had this been inspired by?

Scarlet: We’ve always loved a vocoder. Pretty much every Soho demo has a vocoded part on it at some point! There’s something sinister about a human voice that you can control and manipulate, and somehow it still ends up sounding fun.

It’s also a great way of putting BVs into a track without me having to sing. James has a huge vocal range, so reducing his voice down to something more simplistic is something we both got a kick out of.

That song was inspired by the Olympics and ‘Chariots Of Fire’ and Vangelis. Big sports fans! Would love to hear ‘Make The Final’ soundtracking some televised athletics in a parallel universe.

‘2015’ is primarily instrumental and points towards synthwave… these days, you have a toe in that scene as KNIGHT$ but you didn’t fully head in that direction, could you have done?

James: It’s not for me to say really, but probably not. There’s a bit more to my music than just that.

The final track ‘Solo KO’ is comparatively darker in aesthetic and sombre, but were you sending out a signal with the title and the lyrics “with nothing left to do and still so much to prove”?

There’s a mystery piano ballad following a gap after the end of ‘Solo KO’; this long last track with two songs several minutes apart thing was very much the fashion in the CD era, but could be annoying! Why not just have it as two tracks? *laughs* 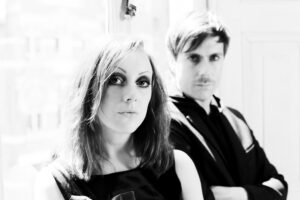 James: I vaguely remember that hidden ballad not really being in our thoughts when putting the tracklist together. It didn’t really fit with the other 9 songs! So when we compiled the 9, we found the album was much shorter than expected!

Adding the hidden ballad was a good way to give a little extra, but we didn’t want to mess with the flow of the other 9 tracks. I hope that makes sense!

SCARLET SOHO seemed to on the cusp of a breakthrough with support slots for IAMX and KOSHEEN that were well received, but it didn’t happen, had that precipitated tensions within further?

James: No, we had some of our best times during this period and enjoyed the ride! At times, we were a little bloody minded, especially when interested parties wanted to speak to us about management and so on, but somehow talking to them often brought us closer together. After all, we were right and they were wrong! 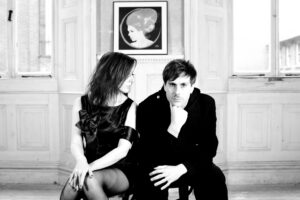 So when did SCARLET SOHO end and how did KNIGHT$ begin?

James: SCARLET SOHO never really ended as such, but after 15 years, we needed to take a break for sure. Our final London show was February 2015. I started writing for KNIGHT$ in early 2016, after almost a year of inactivity. I started to miss singing and writing more than I thought I would!

‘In Cold Blood’ stands up as a good album five years on, which can’t be said of some records, how do you look back on it all now?

Scarlet: Thank you! I hope it continues to have a place in people’s hearts and record collections in the next 5 years 🙂

James: Compared to our other records, it’s the one that never really got promoted and toured. We cancelled the ‘In Cold Blood’ tour through illness, so there is a feeling that some of our best work went unheard, but it’s always nice to hear that people like the album. I think it could be our best.

ELECTRICITYCLUB.CO.UK gives its warmest thanks to SCARLET SOHO