NATION OF LANGUAGE A Way Forward

November 7, 2021 / electricityclub / Comments Off on NATION OF LANGUAGE A Way Forward 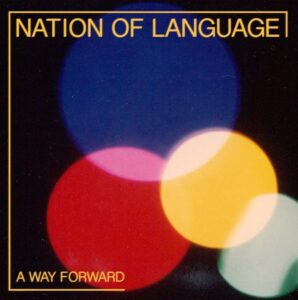 Starting out as a post-punk act, lead singer and songwriter Ian Devaney became interested in using synths after hearing OMD’s ‘Electricity’ in his father’s car for the first time in years. Also featuring his wife Aidan Noell on keyboards and bassist Michael Sui-Poi, the Brooklyn-based trio adopted a “beginner’s mind” to electronic pop with songs such as ‘On Division St’ and ‘Friend Machine’ capturing a sharp synthy spirit alongside a notion of anguish.

A following standalone single ‘Deliver Me From Wondering Why’ explored the more experimental phase of OMD, but issued as a trailer for their appropriately titled second album ‘A Way Forward’, the catchy Motorik drive of ‘This Fractured Mind’ breathed new life into its retrospective references with sprightly synth tones and a danceable ethereal shudder. Dealing with the spectre of unrealised dreams and jealousy, any inferiority complex was countered with a hopeful and optimistic acceptance to move on.

That frantic Motorik beat reappears a few more times during ‘A Way Forward’, with a more direct NEU! approach on ‘Across That Fine Line’ using textural guitar with occasional pulses of synth before a chorus that bursts into an anxious post-punk thrash.

But on several occasions, NATION OF LANGUAGE eschew prominent percussion as on the album opener ‘In Manhattan’ which utilises a pulsing sequenced backdrop that recalls MIRRORS ‘Fear Of Drowning’, reflecting the tense anxieties of young manhood. Meanwhile, the sparse arpeggios of the haunting ‘Former Self’ conjure the feel of a lost East European folk song reimagined with an electronic treatment, although this perhaps is not surprising as it was composed on a nylon string guitar.

With the tick of a clock, ‘They’re Beckoning’ looks as though it will follow a similar route with minimal sweeping synths but a minute and a half in, it kicks with thumping electronic drums, sparking trancey blips and moody bass guitar to recall NEW ORDER like ‘Your Silent Face’ meeting ‘Temptation’ for an infectious brooding closer.

The influence of early OMD makes its presence felt on the atmospheric ‘Wounds of Love’ while the forlorn longing of ‘Miranda’ presents a slow waltz and a closing ivory segment that sounds as if it is about to morph into ‘Souvenir’. Meanwhile, like a drifting train ride, ‘A Word & A Wave’ throws in fits of white noise à la ‘Almost’ and DEPECHE MODE’s ‘Any Second Now’.

But exuding a KRAFTWERK inspired octave shifting template, ‘The Grey Commute’ ponders the daily routine of many with backing that could be MIRRORS with more guitar. And although it is less immediate the some of the other tracks, it carries depth and echoes the John Foxx fronted ULTRAVOX! with ‘Hiroshima Mon Amour’ in its hypnotic mechanised rhythms. 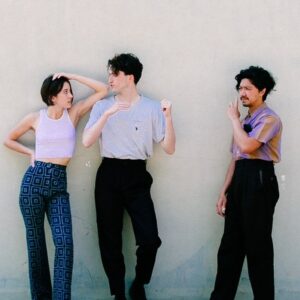 ‘Whatever You Want’ labours a little but overall, ‘A Way Forward’ does as its title suggests. Showing growth from the seed planted during ‘Introduction, Presence’, there is potential for even more and ‘A Way Forward’ confidently showcases to some of the more hipster factions in the music world that synths and drum machines are not dirty words and can be applied with a post-punk influence to an independent pop sound.

Dancing while a little down can be uplifting and the shifting emotions of ‘A Way Forward’ show that while it’s ok to not be ok, it’s also ok to take time to escape as well.

‘A Way Forward’ is available in CD and vinyl LP formats from https://www.nationoflanguage.com/

Posted in Reviews Tagged with Nation Of Language