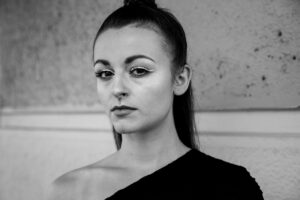 Blessed with a glorious soprano in the vein of Alison Goldfrapp and Tara Busch, what has also stood out, despite having only released a single and EP so far, is the widescreen aesthetic of her music with sharp electronic melodies and inventive arrangements.

Of her single ‘Margins’ from the ‘Lines’

EP, one-time Numan sideman and co-writer of VISAGE’s ‘Fade To Grey’ Chris Payne said: “Very impressive. She has an amazing voice and very nice synths to surround it.”

Encapsulating the filmic ambition of GOLDFRAPP circa ‘Felt Mountain’ and its delightful oddness, IMI is undoubtedly one of the keys to a sustainable synthy future. She will be playing at Electrowerkz in London on Saturday 30th November 2019 alongside REIN and KOMPUTER.

IMI kindly talked about her past, present and future… 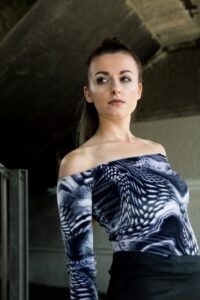 Your sound has an interesting mix of electronic, trip-hop and classical, what is your own musical background?

I was classically trained from the age of 8, but I only started embracing that side of my voice over the past few years when I realised I could re-contextualise it within a more electronic setting. I didn’t really start listening to electronic music until I moved up to Leeds in 2012 for University where I was exposed to the likes of PORTISHEAD and JAMES BLAKE. In 2014 I formed the dream pop band LENIN which gave me my first taste of performing live and ultimately inspired a continued fascination with writing and performing music.

Your voice is incredible, what’s its range? Do you see yourself as a singer, or a songwriter first?

Thank you, my range is about E2 – C5 give or take. Singing was ultimately what led me down the path of music when I was younger, but I often shun my responsibility as a singer as I’m more fascinated by sound design and songwriting.

How did the melodic synth element enter the fray?

It’s hard to pinpoint exactly when this happened, as I had been noodling with software synths in GarageBand from when I first got my MacBook Pro in 2011 when my friends and family all chipped in to help me buy it for my birthday. Since then I have been led by my same naive curiosity to create something I haven’t heard before, whether it’s some weird wonky synth or an amalgamation of seemingly polar opposite sounds. 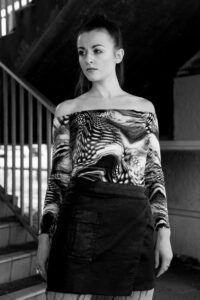 Your father was a New Romantic?

My Dad was away in the Navy a lot when I was young, so years later when I was studying at college, he would help me catch up and teach me all about music history and the bands he listened to growing up.

He loved an eclectic mix of THE STRANGLERS, ROXY MUSIC and DAVID BOWIE; him and my Mum shared a few common interests in bands like VISAGE and I seem to remember hearing ULTRAVOX’s ‘Vienna’ on full blast which my sisters and I would sing along to triumphantly!

To the casual listener, GOLDFRAPP springs to mind with your work, have they been a favourite act of yours over the past few years?

I hadn’t actively listened to GOLDFRAPP until 2016 when I remember getting really into the ‘Felt Mountain’ album. I had just graduated and left education for the first time in my life and was honestly struggling with the realities of the real world. This album came to me like a shining beacon of light, reminding me of the potential for music to transport you to another place, which is the encouragement I needed to continue writing. The result of which was ‘Margins’, or at least an early version of it.

Your first single ‘Born For What?’ was an eclectic mix of styles and it’s a good song, although in hindsight it sounds as though you were undecided on your sound?

was the beginning of a more industrial sound, which was exciting for me at the time as I had felt relatively trapped within quite a melancholic musical space. It was a stepping stone in allowing me to get where I am now, safe in the knowledge that I am not confined by style or genre.

Then came ‘Margins’ which was something of an epic, how did that come together?

‘Margins’ was written almost a year before the other tracks, and it was one of those strange songs that just materialises in front of you. It went through several transmutations after its initial inception, originally written for piano and vibraphone. Before I brought it to the studio, I re-harmonised several elements of it and reimagined it with a synth backdrop. The same theatrical drama shone through, but the industrial electronic aesthetic balanced out its ethereal nature. 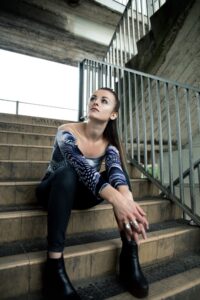 What was it like to make your first promotional video for ‘Margins’?

Being a solo artist makes it difficult to create a visually appealing music video on a budget, especially for someone who hates being in front of a camera.

Luckily filming in a garage in the freezing winter of Leeds took my mind off of my anxieties, and director Joey Haskey’s experimentation with colour and lighting offers a visual feast that I think translates the vibrancy of the track.

Was ‘I Feel Alright’ written from your own first-hand experience? Also, it features a quite pronounced anthemic lead synth theme too…

This song was written after a few years of struggling with some personal issues and it was a celebration of finally feeling ok and feeling hopeful about the future. It will always hold special value to me for that reason, and when times are difficult, I’ll often look back and acknowledge that I’ve conquered that feeling before and I can do it again.

‘The Fence’ starts minimally with a lone synthbass note and then gradually builds, you do have a sense of drama?

‘The Fence’ was one of the few tracks to unravel in front of me lyrically. It originally started as a location recording I took when I was at home in Cornwall. The recording was of an electric fence, and the very idea of a fence conjured up that old saying “the grass is always greener”. It’s quite easy to look at other people’s lives and think they have it all sorted, only to make yourself feel worse about your own situation.

This song was my oath to try to view my own life through a different perspective so that I wasn’t always longing for the other side of the fence. The original location recording didn’t make it to the final recording, but the instrumentation was designed to reflect the growing solidarity of my statement.

With the video for ‘The Fence’, you opted to give a director freedom to do a visual interpretation rather than appear in it yourself? Were there any particular reasons?

I was initially going to have more of a live video setup for this track, but when a mutual friend showed me Deni Pesto’s work, I completely U-turned on the idea as his work resonated with me in a way I can’t really describe. When we were exchanging ideas and he sent over some mood boards, it was as if he had literally leapt into my mind. That sort of cohesion of understanding in collaboration is quite rare so I was happy for him to take the lead and create what he thought was right. I think it is a beautiful video in itself, and like my own music, it is fairly ambiguous and the viewer/listener can draw what they need from it. 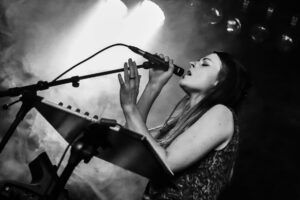 Presenting electronic music live has its own challenges as you found for a moment at The Finsbury gig recently… how does it feel to perform alone, compared with a band, orchestra or choir?

It can be quite stressful when technology fails you and there’s nothing else to pick up the slack, but when things go right it can be extremely cathartic and it’s one of the few times I feel completely present in the moment. I’ve had the vision from the beginning to get involved with a visual artist to add another dimension to the live show.

I played a show at my college a few years ago and had three large white balloons suspended from the ceiling with lights illuminating them and offering an immersive space to absorb my music in. While balloons might not be the most feasible thing to replicate, one of my next challenges is to see how I can create a little of that magic on stage. 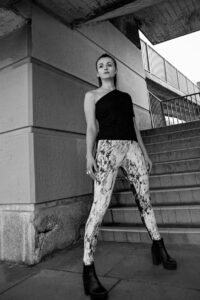 Your keyboard of choice is a Moog Sub Phatty, with so many instruments on the market, what made you decide on that particular one?

I bought my Moog Sub Phatty for my old band LENIN, so I was looking for something that could produce some big bass and lead lines while I was singing.

At the time I didn’t know much about synthesizers, but it is really tactile and it’s not too complicated to understand so it was the perfect starting synth for me.

How are you finding exploring different hardware and software in the studio, what tools have you particularly taken to in your recording process?

When I’m writing, I only have access to predominately software (with the exception of my Moog Sub Phatty and some Teenage Engineering Pocket Operators), so I’ll often map out different ideas with the Arturia V Collection which has an expansive array of sounds. For the past four tracks I’ve recorded, I’ve worked with Matt Peel who has a growing collection of synths and other wonderful things in his studio The Nave in Leeds.

Each time I go there I discover something new, the last time we were recording, Jacob Marston of DEAD NAKED HIPPIES was playing on some old Simmons drum pads to create the thunderous toms in ‘The Fence’. I’m currently looking for my next investment for my home set-up, some of the Roland Boutique range are looking like appealing options but any suggestions would be greatly appreciated. 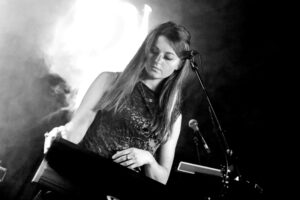 You will be opening for REIN in London, what can the audience expect if they arrive at Electrowerkz early?

I’m working on some new material at the moment that I might share in London. But as it stands, this will probably be my last performance with my current setup.

It’s been a challenging but equally wonderful few years since my first single release and I’m hoping to celebrate this and to share this with others in November.

What are you own hopes and fears for your future in music?

When I was writing this music, my visions were far grander than were feasibly possible and it’s quite easy to feel deflated when things don’t meet certain expectations, especially when there’s no-one else to share and balance the burden. Something that I think is important for me moving forward is to work with others and I’m really excited at that prospect as I am keen to learn from others and expand my understanding of music.

ELECTRICITY.CO.UK gives its sincerest thanks to IMI

EP is released by Bibliotek, available as a CD or download direct from https://imimusicuk.bandcamp.com/album/lines