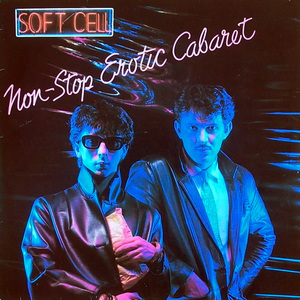 So! “Here we are again!” Sorry, that’s actually a lyric from another band touring on the 40th Anniversary of a classic 1981 album.

Art students who met at Leeds Polytechnic, the album title came from one of the neon signs outside The Raymond Revue Bar in London’s Soho where Almond lived, an area that at the time was full of strip clubs, sex shops and entrances saying “model upstairs”.

While JAPAN glamourised Chinese Communism on ‘Tin Drum’ and THE HUMAN LEAGUE presented working class aspiration like a synthpop ABBA on ‘Dare’, SOFT CELL told of the grit that could come with glitter in musical tales about dirty old men, prostitutes, grooming, sexual deviance, personal grievance, tabloid sensationalism, middle class entitlement and living in squalor. Only the pair of tunes by OMD about the brutal execution of a teenage girl on ‘Architecture & Morality’ were historically darker than SOFT CELL’s gutter heart take on reality.

While the duo were in New York to record and mix the album with producer Mike Thorne, ‘Tainted Love’ became a hit in Germany. So with Ball otherwise engaged in working the state-of-the-art NED Synclavier and the much more basic Roland Synthe-Bass SB100 which provided SOFT CELL with a very distinct sound, Almond was despatched to perform the song on TV show ‘Disco’ with a Dave Ball lookalike who ZDF tried to keep in shadow and out of shot, but failed!

Of ‘Entertain Me’, Marc Almond said “This is about people who are just never satisfied. The pop star world we found ourselves in after the success of ‘Tainted Love’”; but of this new world they were now part of, Dave Ball recalled “it was all a big adventure. Highlights were meeting Divine and Madonna in Danceteria then meeting Andy Warhol at The Factory” 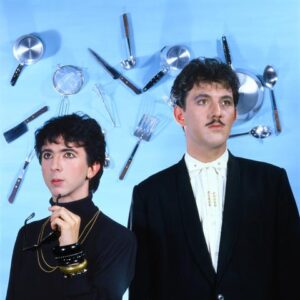 Bedsitter’ is another case in point which despite its bittersweet ode to nightlife, on which the Roland TR808 Rhythm Composer was heard on a UK hit single for the first time, reflects on the poor quality accommodation offered by private landlords thanks to the selling off of affordable council housing in Britain; the effects of this Thatcherite policy are sadly still felt today.

The most sinister song when applied to the present is ‘Frustration’ which could be a narrative on incels or “involuntary celibates”, the deeply unpleasant right wing faction of males who are unable to get a romantic or sexual partner despite desiring one, but whose misguided and ignorant anger spills into misogyny and racism.

The new album ‘*Happiness Not Included’’ is released on 25th February 2022 via BMG, the single ‘Bruises On My Illusions’ is available now on CD and 12″ vinyl formats from https://softcell.tmstor.es/