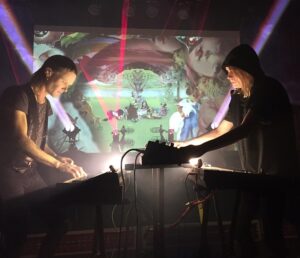 Releasing their first self-titled EP in September 2008, KITE have taken a low key approach with the support of their label Progress Productions.

Formally members respectively of MELODY CLUB and STRIP MUSIC, the pairing of Nicklas Stenemo and Christian Berg have undoubtedly been producing some of the best electronic pop music in the world during the past few years.

With Stenemo’s rugged and emotive vocals alongside Berg’s expansive synth interplay, the glorious and majestic sound of KITE has now become the benchmark for a genre that has taken many twists and turns since the arrival of ‘Autobahn’ in 1974 through Synth Britannia and Electroclash to the EDM of today..

EP helped KITE gained some much deserved international recognition with Vince Clarke being one notable fan, but it was with the duo’s most recent release ‘VI’

that saw them at their best.

Getting progressively darker and more epic, this sonic template was best exemplified by the sparsely serene ‘Nocturne’ and the mighty statement of ‘Up For Life’, possibly one of THE songs of 2015.

You and Christian had been in more conventionally inclined bands prior to KITE, so what inspired you to come together to produce a more obviously synthesized sound?

Yes that’s true, we both started in bands with 4-5 members with live drums, guitars and stuff. I guess we didn’t know so much about programmed music, so to be able to do music and play live, we had to put bands together. The electronic sound we have in KITE is a new “since 2008” exciting way for us to create music, and makes it possible for us to be a live duo, which is really important for us.

KITE only release EPs. Is the album now a redundant format in your opinion? What do you consider the future of music consumption?

Mainly we do EPs because it makes it possible to release and move on more often. It’s really more rewarding, and I think it turns up the quality of every song on our EPs to do so. Also as a listener, I find it perfect to process about 5 songs at a time.

I think the streamed playlists are gonna keep on being big, but also more conceptual music without the pop structure is gonna grow. Vinyl and streaming is the future. And artists must create live experiences that people wanna pay for.

‘VI’ is your most accomplished work yet and more epic than before. Who were your influences leading up to this more majestic template?

I think the writing process has been influenced by our bigger and bigger live shows which have become more over the top and epic every year.

I don’t see that we have been influenced by any particular music… it’s more evolved in our cinematic way to make music.

And with the whole live concept, we aim more to be like PINK FLOYD and JEAN-MICHEL JARRE than minimalistic synthpop. 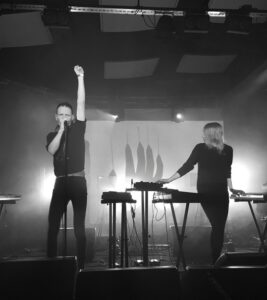 What is the general creative dynamic within KITE when writing and recording?

Christian is really great making suggestive drone landscapes. I’m more a traditional songwriter. So we send music to each other all the time, add stuff and change chords etc.

Sometimes we just jam over a beat… but we’ve learned that there is no certain way we can make music… we just mess around with it in every way possible and wait for the magic to happen. Pure luck I guess 🙂

We have learned to be humble about that and to work hard, so that’s a good start.

‘VI’ appears to feature some Prog rock elements, are you secret YES and early GENESIS fans?

Maybe not those particular bands, but you are on to something! The cinematic over-the-top stuff! We’re putting film music into pop, ENNIO MORRICONE, VANGELIS, MICHAEL NYMAN and other Proggers.

‘Up For Life’ is nearly nine minutes long… how did that come together?

It started with the ‘A’-part. Then we wanted to make an instrumental outro for the EP, but we realised they were meant to be married.

‘It’s Ours’ is a captivating, percussive barrage that has a classic yet fresh sound that could be 1983 or 2015, what are your thoughts?

Yes, I guess this song is the most retro on ‘VI’ due to the harmonies and melody; so we found it really important to use modern machines to compensate that. We don’t want to sound all the way retro.

While ‘VI’ has been your best work to date, ‘V’ brought you to wider attention, particularly with the songs ‘Dance Again’ and ‘The Rhythm’… which songs from your catalogue so far so do consider to be milestones in your career?

As I see it, our whole career is a matter of small steps and slow progress. We don’t really have certain songs that changed the band overnight. But important songs could be ‘My Girl & I’ from the debut EP, ‘Jonny Boy’ from EP ‘III’, ‘Dance Again’from EP ‘V’ 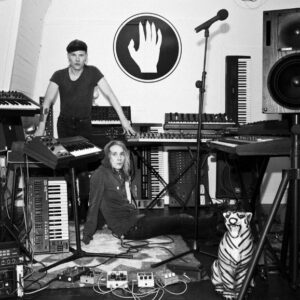 KITE possess a significant amount of equipment. What vintage synths do you have in your armoury and which have proved to be the most durable to use in a modern concert environment?

To name all the synths we use on recordings is almost impossible ? 🙂

But our live set-up is currently:

The majority of your concerts are restricted to Sweden at the moment, with occasional jaunts to Germany. Are there any territories you would be keen to visit?

Yes, we have been playing mostly in Sweden, and we’ve done four tours in China. Now we feel we have a great position in Sweden and are going to focus on Europe. It’s like starting from the beginning, but we are really excited to start touring and bring our ridiculously oversized live set-up to the small clubs all over. I guess Germany will see a lot of us.

KITE are known for saying “NO” to the pop game. What advice would you give to other acts about maintaining a steady fan base and producing quality output in a music environment that appears to be obsessed with reality TV pop and formulaic EDM?

This is how I’ve learned to feel comfortable in what I do:

a) Start with making music for your own sake. Don’t make music that is hip now, because it will be out tomorrow, you have to change… and maybe you don’t want that.

b) Don’t force your music on people with social media, radio hits and too many interviews. It is better to let the music spread by word-of-mouth.

c) Picture yourself performing the music on stage when you’re like 70 years old.

But I don’t disrespect pop chameleons, they have a function too. I’ve just realised that ain’t my way to happiness. 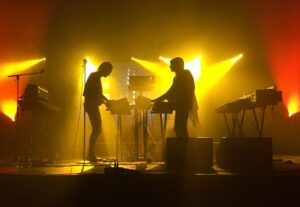 You’ve attracted a very loyal following of all ages and types, how do you think you have managed to achieve this?

I think it’s because we are really ambitious live.

Sweden appears to be the modern hub for quality electronic pop. Why do you think that is and do you feel any kinship with other bands?

I actually don’t know the electronic scene that well. But I’ve heard we are pretty good 😉

AGENT SIDEGRINDER and HENRIC DE LA COUR are electronic, and I really like what they are doing.

What’s next for KITE?

Special thanks also to Madeleine Berg

is released by Progress Productions and available as a CD, 12″ vinyl EP or download via the usual online outlets