November 4, 2015 / electricityclub / Comments Off on RUSTY EGAN vs ELECTRICITYCLUB.CO.UK in Düsseldorf 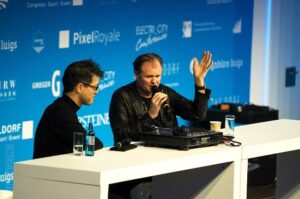 German music formed a large part of RUSTY EGAN’s DJ sets at The Blitz Club between 1978-1981.

The legendary Blitz Club DJ and Chi Ming Lai of ELECTRICITYCLUB.CO.UK recently participated in a well-received discussion about how German electronic music influenced the New Romantic movement at the ELECTRI_CITY_Conference in Düsseldorf.

Including other international acts such TELEX, SPARKS, YELLO and YELLOW MAGIC ORCHESTRA, The Blitz Club‘s soundtrack cocktail was to prove highly influential on the UK music scene and spawned a wider movement that led to the success of acts such as VISAGE, SPANDAU BALLET, LANDSCAPE and ULTRAVOX who formed part of the clientele.