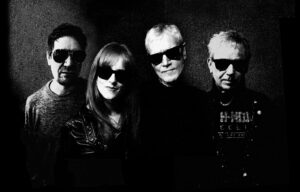 ‘Howl’ is the fifth studio album from JOHN FOXX & THE MATHS and sees the former ULTRAVOX! front man reuniting with his ‘Systems Of Romance’ guitarist Robin Simon.

Presenting eight tracks of fierce art rock, it sees guitars as very much part of the scenery in partnership with the electronics. Recorded at Benge’s MemeTune studios in Cornwall , ‘Howl’

is the first JOHN FOXX & THE MATHS album since the instrumental score for a theatre production of EM Forster’s ‘The Machine Stops’, released as ‘The Machine’ in 2017.

Before that, there was an extremely prolific period which saw three albums ‘Interplay’, The Shape Of Things’ and ‘Evidence’ issued between 2011-2013. And this was without Foxx’s other ambient and soundtrack outings.

After the prolific release schedule of 2011-2017, you’ve kept a low profile over the last few years, what have you been doing to keep you busy?

There’s always loads to do -Writing lots of songs and throwing them away. Editing ‘The Quiet Man’ book and digging stuff out of notebooks. Learning to play primitive guitar again. Remembering who I am and for what. Enjoying other people’s gigs. Relishing out-of-control feedback and the sheer joy of being inhabited by very loud, bone-shattering music. 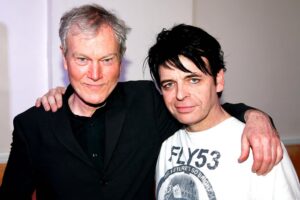 One of the high profile tracks towards the end of that period was ‘Talk (Are You Listening To Me?)’ with Gary Numan in 2016, how did it all come together?

Well, Gary and I had been mentioning we ought to do something together – for about thirty years, but never got around to it. Then Steve (my manager and a friend of Gary) was in LA with him and played the Maths version of ‘Talk’. Gary liked it, Benge got in touch and they began to swap recordings. We mixed a version, and that was it. About time.

Your most recent five album releases have been ambient or instrumental soundtracks, so what inspired you to start working on songs again with ‘Howl’?

Decided to have a listen to everything I’d made – which is something I’ve never actually done before. Bit of a shock. Felt there were a couple of important things I hadn’t properly got to.

One was recording with proper violence and growl. What Lois and I used to call ‘Radge’. I also wanted to get to the sort of cruel glam I really liked – nothing pretty, but a dark, writhing glamour that The Velvets or Iggy touched on – a sort of torn sequins and shades thing. A bit damaged and very urban.

At the same time, I realised I’d not done another of the things I most wanted to – which is work with Robin Simon properly again. Rob came out of that glam into Punk thing as well – and he can play the most violent guitar you’ve ever heard – so the time was absolutely right. 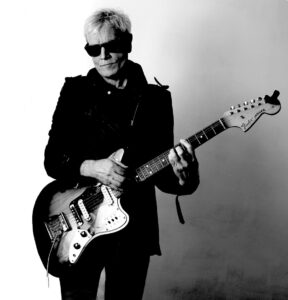 In terms of writing and doing demos, had these songs been conceived with guitars in mind from the very off?

Lyrically, what was moving you with these ‘Howl’ songs?

Well there’s plenty to howl about at the moment. We’re all living in particularly fast-moving and downright weird times. ‘The Dance’, ‘Howl’, ‘Last Time I Saw You’, ‘Everything Is Happening At The Same Time’, in fact all the songs, are kicked off by that.

Robin Simon performed with you at The Roundhouse and Troxy gigs in 2010-2011, so it has taken a few years for you both to work together on this record, you rate him highly don’t you?

He’s the best guitarist ever. Doesn’t play clichés, invented modern guitar – everyone imagines guitars always sounded like they do today but they certainly didn’t before Rob.

In my book, there are four top guitarists – Rob Simon first, along with John McGeoch, Steve Jones, and Fripp. Rob combined the ferocity of Punk with overdriven synths and he was the first to work in that way, using effects as an integral part of the sound. Fripp did some marvellous things later with Bowie. McGeoch worked with MAGAZINE and created their sound, then I met up with him in my studio when he, then Robert, were working with SIOUXSIE & THE BANSHEES. Steve Jones did the most massive blazing chop and drone ever recorded. All these guys have completely unique properties

But for me, Rob combines all of that with the kind of finesse and bite that Mick Ronson had. It’s a broad spectrum, but one thing Rob never loses sight of is the basic animal aggression- and I love that. Agility and power. Marvellous.

Is ‘Howl’ sonically a record perhaps you’ve been itching to make since you left Cologne in 1978 after recording ‘Systems Of Romance’?

Oh yes – exactly. But I needed to exorcise a few things first – KRAFTWERK, for one. 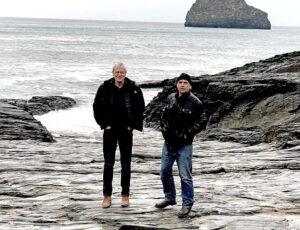 You’d worked with Robin since that time on ‘The Garden’, ‘The Golden Section’ and ‘In Mysterious Ways’ but on ‘Howl’, you’ve given him more of a free hand, are you working like you did when you were both in ULTRAVOX!?

Absolutely. A few things have changed though – we don’t rehearse live all together, and I do miss that – We might correct that next time. It gives certain feel to the songs that I like.

Sometimes Rob will give you three or four versions of a song each time he plays it. All good – and mostly better than you imagine. Sometimes so radical you catch your breath.

The thing is to try to absorb what he’s doing quickly enough to work with it. It’s the catching lightning in a bottle thing. You also have to get out of the way sometimes and concentrate on simply catching the take. You learn to live in the moment and the whole process becomes organic and alive – it’s real life actually happening. 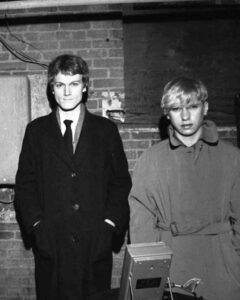 You’ve often likened Benge to Conny Plank, so was there any moments of déjà vu when you, Robin and him were together in his countryside studio in Cornwall?

Many times – in fact most of the time. Surprises you in the same way. Never off balance. Always totally competent, but completely unpretentious. Always out for sonic adventure.

Benge even looks like Conny Plank – especially when he’s thinking. Same sort of mannerisms. I swear there’s a stray gene knocking about.

It’s a fantastic piece of luck to come across two guys like that in a single lifetime.

The manner of the guitar driven start on ‘My Ghost’ will be something of a surprise to some?

While the album has a distinct guitar focus, the synths have not disappeared, like on the title song which has a screeching first two thirds but a more electronic final section; it’s a monster in a scary kind of way, what was on your mind when you conceived that one?

We were simply reacting to what Rob delivered. We’d all found a sound that seemed alive, so of course Rob was straight in there wrestling with it. Luckily Benge recorded all that immediately. It was a single take. Rob played it all over another song – Completely demolished it, so I had to write another around what he’d delivered.

I’d also been thinking about the Allen Ginsberg poem ‘Howl’ and what Rob did fitted. A sort of telepathic coincidence, because I hadn’t mentioned that at all. The song isn’t about the same thing, though.

The track is very reminiscent of that ‘Systems Of Romance’ period…

I’d been pondering how to revisit and update a few impressive things from the past, but in a completely modern context, and here it all was.

Hannah’s busy conspiring too, with her wipeout feedback – especially at the end, and Benge did that great squelch synth to break into the end section – plus some nice and mucky but spare bass and drums, to give everyone enough space.

In short – a series of accidents and coincidences that delivered something alive into the room. That’s how recording should be. Couldn’t sleep properly for days after. 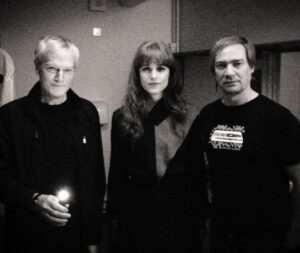 So Hannah Peel is there with her violin on the ‘Howl’ album, evoking even more parallels with ‘Systems Of Romance’?

Always liked what an amped up violin or viola can do. I need chaos. Cale was always an inspiration in the Velvets – it’s another living beast to wrestle with, and Hannah loves to let it howl too. She’s absolutely full spectrum, is Hannah – conducts an orchestra and equally capable of conducting total demolition via feedback and distortion levels that can wreck a sound system. Remains calm throughout.

‘Everything Is Happening At The Same Time’ and ‘New York Times’ both have something of a Metadelic vibe about them?

That’s always there. A sort of punk psychedelia – it’s a cornerstone for me. Always emerges. Goes back to ‘When You Walk through Me’ from 1978, then into ‘No One Driving’ and so on.

Can’t ever forget Rob first playing ‘When You Walk Through Me,’ when I brought it in to rehearsals. He understood it instantly and completely. Fantastic playing. Especially that and ‘Maximum Acceleration’. Totally bloody Marvellous!

‘Tarzan & Jane Regained’ comes over a bit like U2 covering ‘Quiet Men’ with all that echo-locked harmonic guitar?

Well, although I like some of the things they’ve done in the past, we’ve no wish to sound like them – U2 certainly pinched some of our early sound in the 1970s. Particularly Rob’s approach. Mind you, they weren’t alone. I think we were the most copped unit on the planet around ’78-79. 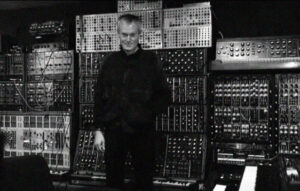 In ‘The Dance, there’s some echoes of ‘Goodbye Horses’ by Q LAZZARUS which was on the soundtrack of ‘Silence Of The Lambs’, any coincidence?

Completely. I’ve got no memory of that. I’ll check it out.

‘Last Time I Saw You’ art rocks like hell…

Great – Rob and Benge were saying recently that’s the starting point for the next album. I’m on the case.

Where did the gorgeous cinematic ballad ‘Strange Beauty’ emerge from? Is that a soaring ARP Odyssey solo or a violin?

It sort of descended all at once, one night, as the best things tend to. No memory at all of writing it. Simply played it to some exterior direction – and there it was. Had to check it wasn’t someone else’s tune.

The solo is Hannah integrating with synth as she does so perfectly. She did a lot of that on the record, as well as the wild stuff. Widens everything out somehow. After she’s worked on a track, it sounds twice as big, and you’re not sure how she did it. Benge also did massive things with the drums and more synths. Rob did his seemingly simple but essential structural work. Everyone really went for that one. It went tidal.

Is the prospect of JOHN FOXX & THE MATHS performing again as a group ever a possibility in the future?

We’re being offered USA and Mexico at the moment so I guess we’ve got to get down and review things asap, but it’s like knitting fog. Penalty of working with top people – Everyone’s suddenly off with their own career – Hannah in Ireland and increasingly global, there’s an international queue for Benge in Cornwall, Rob nipping between LA and Yorkshire.

We all want to do it, because it’s a real buzz blasting it out together, and Rob seems to have galvanised the whole thing – as he always does. But it’s got to be absolutely right for everyone to think of clearing the table.

ELECTRICITYCLUB.CO.UK gives its sincerest thanks to John Foxx

Special thanks to Steve Malins at Random Management 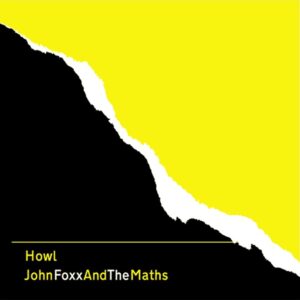