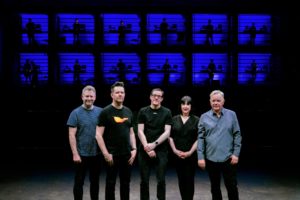 It follows them as they re-stage their acclaimed ‘So It Goes..’ collaboration with conceptual artist Liam Gillick and a 12-piece synthesizer orchestra recruited from Manchester’s Royal Northern College of Music.

Coinciding with the 40th anniversary of JOY DIVISION’s TV debut performing ‘Shadowplay’ on Granada TV, introduced by their soon-to-be Factory Records boss Tony Wilson, the film celebrates the past, present and future of NEW ORDER.

First performed at the Manchester International Festival 2017, the audio / visual spectacular had its own technical and logistical challenges, with up to 19 musicians on stage including conductor Joe Duddell.

Taking the installation to OGR Torino and Wiener Festwochen earlier this year, the whole concept had to be almost totally reconstructed thanks to the height restrictions and dimensions of the two hosting art spaces in Italy and Austria respectively. 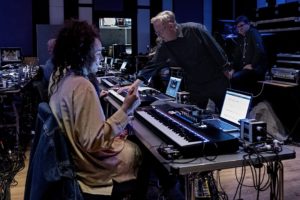 For the musical aspect of the show, the MIDI information controlling the NEW ORDER’s regular live set had to be transcribed into twelve individual music scores for each of the students to play by hand. But controlled from a huge computer were the light show, the angles of the white Venetian blinds in each of the cubicles that the synth orchestra were each positioned in and all the sounds for the various synthesizers.

Still very much a concert, Liam Gillick was adamant that this wouldn’t be “a weird art event with music”. Stephen Morris got fully involved in the technological aspects because he was, in his own words, “the only one boring enough to read the manual”, a trait which Bernard Sumner reflected on as being “unusual for a drummer” and something which long suffering wife Gillian Gilbert laughed about and said made him “impossible to live with…”

But Morris spoke in awe of how with the original NEW ORDER productions, the band would programme each note laboriously into the sequencers before speeding up the results, while each member of the synth orchestra would use their virtuoso ability to deconstruct and tightly recreate the fast programmed elements of tracks like ‘Plastic’, ‘Sub-Culture’, ‘Vanishing Point’, ‘Shellshock’ and ‘Bizarre Love Triangle’.

But as Cunningham remarked, “you’ve got to have a feel” and this was a quality which the synth orchestra undoubtedly provided. The best song from NEW ORDER’s most recent ‘Music Complete’

album, ‘Plastic’ was presented full length as were all the other songs in the film, a relief from the usual quick cut butchering and fast editing that has occurred in 21st Century music event broadcasts aimed at youngsters with attention deficits.

The spectacular sea of flashing straight line visuals came over well on the small screen and reflected the song’s complex but energetic combination of Giorgio Moroder and house, aided by Sumner’s disco dad dancing and the silhouetted movements of the synth orchestra looking like a futuristic ‘Jailhouse Rock’. 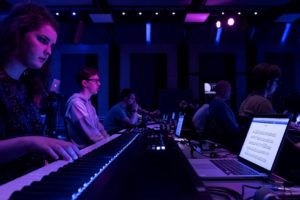 version and the polarising John Robie remix along with many new parts, provided amusement with a major continuity error thanks to two very different looking female backing singers being used over the two dates during which the concerts in Vienna were filmed for this documentary.

Not doing ‘Blue Monday’ and ‘Truth Faith’ at the ‘So It Goes..’ shows encouraged NEW ORDER to be inventive with the setlist to primarily include other more synth friendly material. But one of the most interesting choices was the post-punk rage of ‘Disorder’, the opener from ‘Unknown Pleasures’

. While not presented as a concert number in the film, the rehearsal footage was a reminder of its blistering impact while leading to a section on the forever looming legacy of JOY DIVISION vocalist Ian Curtis.

After the passing of Curtis, Bernard Sumner took over lead vocals from the ‘Movement’ album onwards and in the film, Phil Cunningham recalled how uncomfortable Sumner looked when listening to it as the band members convened to listen back to the NEW ORDER catalogue to choose songs for the ‘So it Goes..’ shows. 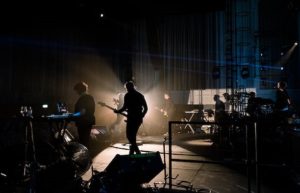 A short section focussed on Tom Chapman replacing Peter Hook as bassist. While Peter Saville reflected that the chemistry which NEW ORDER had in their classic line-up was what made them great, he also accepted that “chemistry is combustible”; and while Sumner praised Chapman’s contributions on ‘Music Complete’, he complimented Hook obliquely by saying “not that the other bass in our history wasn’t great, it was great!”

Sumner amusingly waved and greeted the synth orchestra before a fabulously dreamy update of ‘Bizarre Love Triangle’ which was visually enhanced by close-ups of the exuberant actions from the synth orchestra members, although just as the track segued into ‘Vanishing Point’, the performance disappointingly faded off into the next documentary chapter.

captured the tense sonic cathedral of JOY DIVISION while adding some strangely uplifting qualities, both songs made for the ultimate display of multi-layered melancholic grandeur. 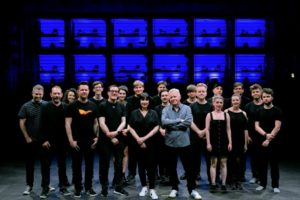 Beautifully produced, while the film itself was not too in-depth about the band’s history, it was an enjoyable snapshot of a reconfigured band in transition who were aware of their status as treasured veteran artists. Peter Saville concluded that Liam Gillick’s concept, as “his dialogue with his idea of NEW ORDER”, was an artistic success and “put the group back into an uncomfortable space”, just as in their formative years.

As much a document about the regeneration of Manchester as a cultural force as well as the continuing relevance of NEW ORDER, what was particularly touching about ‘Decades’ was the band’s respect of their tremendous back catalogue and general happiness that their naïve pursuit of fun led them to success.

Now, if only DEPECHE MODE would be a bit more grateful for their lot and accord more respect to the very songs that got them to where they are today…