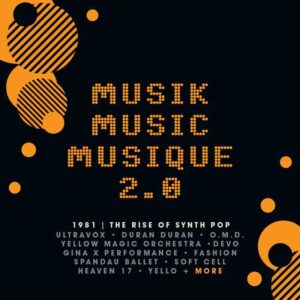 1981 is the year covered by the second instalment of Cherry Red’s ‘Musik Music Musique’ series.

1980 was something of a transition year for the synth as it knocked on the door of the mainstream charts but by 1981, it was more or less let in with welcome arms. From the same team behind the ‘Close To The Noise Floor’ compendiums and the most excellent ‘Electrical Language’ boxed set, ‘Musik Music Musique 2.0 1981 – The Rise Of Synth Pop’ presents rarities alongside hits and key album tracks from what many consider the best year in music and one that contributes the most to the legacy of electronic music in its wider acceptance and impact.

Featuring HEAVEN 17  with ‘(We Don’t Need This) Fascist Groove Thang’, OMD with ‘Souvenir’ and the eponymous single by VISAGE, these songs are iconic 1981 canon that need no further discussion. Meanwhile the longevity of magnificent album tracks such as ‘Frustration’ by SOFT CELL and ‘I Remember (Death In The Afternoon)’ by ULTRAVOX can be summed by the fact that they have featured in 21st Century live sets alongside their parent acts’ hits.

Although not quite as celebrated, ‘You Were There’ from pastoral second John Foxx long player ‘The Garden’ captures the move from stark JG Ballard imagery to something almost romantic. DEVO are represented by the LinnDrum driven ‘Through Being Cool’, the opener of the ‘New Traditionalists’ album which comes as a statement that the mainstream was their next target; the Akron quintet were one of the many acts signed by Virgin Records as the label focussed on a synth focussed takeover that ultimately shaped the sonic landscape of 1981.

Then there’s TEARS FOR FEARS’ promising debut ‘Suffer The Children’ in its original synthier single recording and The Blitz Club favourite ‘Bostich’ from quirky Swiss pioneers YELLO. Another Blitz staple ‘No GDM’ from GINA X PERFORMANCE gets included despite being of 1978 vintage due to its first UK single release in 1981. The use of synth came in all sorts of shapes and FASHIØN presented a funkier take with ‘Move Øn’ while the track’s producer Zeus B Held took a more typically offbeat kosmische approach on his own ‘Cowboy On The Beach’.

Pivotal releases by JAPAN with the ‘The Art Of Parties’ (here in the more metallic ‘Tin Drum’ album version) and A FLOCK OF SEAGULLS ‘(It’s Not Me) Talking’ highlight those bands’ then-potential for mainstream success. But in the battle of the New Romantic boy bands, the sitar tinged DURAN DURAN B-side ‘Khanada’ easily blows away the SPANDAU BALLET album track ‘Reformation’ in an ominous sign as to who would crack it biggest worldwide.

The great lost band of this era, B-MOVIE issued the first of several versions of ‘Nowhere Girl’ in December 1980 on Dead Good Records and its inclusion showcases the song’s promise which was then more fully realised on the 1982 Some Bizzare single produced by the late Steve Brown although sadly, this was still not a hit.

The best and most synth flavoured pop hits from the period’s feisty females like Kim Wilde and Toyah are appropriate inclusions, as is Hazel O’Connor’s largely forgotten SPARKS homage ‘(Cover Plus) We’re All Grown Up’. But the less said about racist novelty records such as ‘Japanese Boy’ by Aneka, the better… the actual nation of Japan though is correctly represented by their most notable electronic exponents YELLOW MAGIC ORCHESTRA with ‘Cue’ from ‘BGM’, the first release to feature the Roland TR808 Rhythm Composer.

With these type of boxed sets, it’s the less familiar tracks that are always the most interesting. As the best looking member of TANGERINE DREAM, Peter Baumann had a crack at the single charts with the catchy Robert Palmer produced ‘Repeat, Repeat’ while former Gary Numan backing band DRAMATIS are represented by ‘Lady DJ’ although its epic A side ‘Ex Luna Scientia’ would have equally merited inclusion. But BEASTS IN CAGES who later became HARD CORPS stand out with the stark dystopia of ‘Sandcastles’.

The one that “should-have-been-a-pop-hit” is the ABBA-esque ‘I Can’t Hold On’ by Natasha England and it’s a shame that her career is remembered for a lame opportunistic cover of ‘Iko Iko’ rather than this, but the delightful ‘Twelfth House’ demonstrates again how under-rated Tony Mansfield’s NEW MUSIK were, and this with a B-side!

The rather fraught ‘Wonderlust’ by THE FALLOUT CLUB captures the late Trevor Herion in fine form on a Thomas Dolby produced number with a dramatic Spaghetti Western flavour that is lushly sculpted with electronics. Over a more sedate rhythm box mantra, ‘Love Moves In Strange Ways’ from BLUE ZOO swirls with a not entirely dissimilar mood.

Mute Records founder Daniel Miller was breaking through with his productions for DEPECHE MODE in 1981, but representation on ‘Musik Music Musique 2.0’ comes via the colder austere of ‘Science Fiction’ by Alan Burnham. ‘West End’ by Thomas Leer adds some jazzy freeform synth soloing to the vocal free backdrop, while ‘Surface Tension’ from ANALYSIS is an appealing instrumental.

The strangely accessible weirdness of CHRIS & COSEY’s ‘This Is Me’, MYSTERY PLANE’s ‘Something To Prove’ and the gritty ‘Brix’ from PORTION CONTROL will delight those more into the leftfield, while AK-47’s ‘Stop! Dance!’, the work of Simon Leonard (later of I START COUNTING and KOMPUTER fame) is another DIY experiment in that aesthetic vein.

Some tracks are interesting but not essential like Richard Bone’s ‘Alien Girl’ which comes over like an amusing pub singer SILICON TEENS, Johnny Warman’s appealing robopop on ‘Will You Dance With Me?’ and the synth dressed New Wave of ‘Close-Up’ by THOSE FRENCH GIRLS. For something more typically artschool, there’s the timpani laden ‘Taboos’ by THE PASSAGE and SECOND LAYER’s screechy ‘In Bits’.

More surprising is Swedish songstress Virna Lindt with her ‘Young & Hip’ which oddly combines showtune theatrics with blippy synth and ska! The set ends rather fittingly with Cherry Red’s very own EYELESS IN GAZA with the abstract atmospherics of ‘The Eyes Of Beautiful Losers’ although they too would eventually produce their own rousing synthpop statement ‘Sunbursts In’ in 1984.

Outside of the music, the booklet is a bit disappointing with the photos of OMD, TEARS FOR FEARS, HEAVEN 17, B-MOVIE and a glam-bouffanted Kim Wilde all coming from the wrong eras. And while the liner notes provide helpful information on the lesser known acts, clangers such as stating Toyah’s ‘Thunder In The Mountains’ was from the album ‘The Changeling’ when it was a standalone 45, “GONG’s Mike Hewlett” and “memorable sleeve designs by Malcolm Garrett’s Altered IMaGes” do not help those who wish to discover the origins of those accumulated gems.

But these quibbles aside, overall ‘Musik Music Musique 2.0’ is a good collection, although with fewer rare jewels compared with the first 1980 volume which perhaps points to the fact that those who had the shine to breakthrough actually did… 40 years on though, many of those hit making acts (or variations of) are still performing live in some form.

Was 1981 the most important year in synth as far becoming ubiquitous in the mainstream and hitting the top of the charts internationally? With VISAGE’s ‘Fade To Grey’ becoming a West German No1 in Spring 1981 through to SOFT CELL taking the summer topspot in the UK and culminating in THE HUMAN LEAGUE eventually taking ‘Don’t You Want Me?’ to No1 in the US, the sound of synth had done its job. Setting the scene for 1982 and 1983, further editions of ‘Musik Music Musique’ are planned. 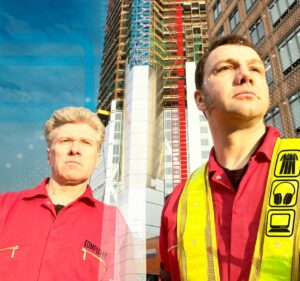 In association with Cold War Night Life, SATURDAY 30TH NOVEMBER 2019 at Electrowerkz in London will feature the live return of KOMPUTER. 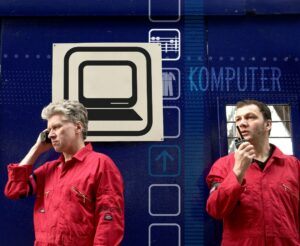 In a break from making preparations for the show, David Baker had a quick chat about Russian history, OMD, Daniel Miller and more… 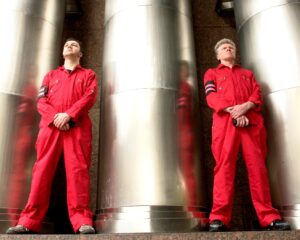 ELECTRICITY.CO.UK gives its sincerest thanks to David Baker